Name change and re-brand for the National Brokerage Network!

The background of the National Brokerage Network

The National Brokerage Network was formed in 2003 as a response to the development of ‘Community Care (Direct Payments) Act’ in 1996. There was a will and an intention from a group of practitioners in the field of Health and Social Care across the UK to really transform and personalise the way people could experience and direct their own care & support arrangements. The name ‘National Brokerage Network’ (NBN) was adopted as a way of describing this group of forward-thinking practitioners.

‘Putting People First’ was a governmental concordat published in 2007- introducing personal budgets for the first time and helping to transform adult social care for the better.

The NBN became active in introducing the approach of Support Brokerage as a mechanism for helping people to Self-Direct their own support- offering training for people to become Independent Support Brokers, and regular mentoring sessions and meetings to further and develop the approach. A core group of members formed around the UK- many of the original members moved away to focus on other areas of development and consultancy work in Health and Social Care; and new members joined with a fresh interest in furthering the approach of Self Directed Support.

In March 2019, the board of Directors voted to dissolve the legal entity which held the NBN, and the new Chair person of the Network (Liz Leach Murphy) volunteered to continue running the Network as a sub-committee of Imagineer Development UK CIC, which is an active & thriving social enterprise. This was taken to a vote, and the board agreed unanimously that this was the best option to ensure the continued operation of the Network.

Since 2019 Imagineer has continued to operate and administer the activities of the National Brokerage Network, and we have seen significant growth and increase in its activity as a result.

Introducing a new (but familiar) name for the Network

Imagineer as a whole has been undertaking some significant changes in the past year to the website and social media presence, branding and operating activities which have been triggered in part by the Covid-19 Pandemic. One of these key changes is that the National Brokerage Network (NBN) is being re-branded and will now be known as ‘Support Brokerage Network’ or ‘SBN’.

Here is our new logo- we hope that the new name will enable people to find us more easily, and is a better description of what we do. We have kept some familiar elements of the old logo for continuity.

The Support Brokerage Network  (SBN) is a way of bringing Support Brokers and Self-Directed Support practitioners together to develop their knowledge, share best practice and learn from one another.

We’re very excited to be getting involved in some international work further afield- this fits with our wider social mission and purpose as a Community Interest Company, and it is also reflected in the name change, which no longer has the work ‘National’ in it. One of our most recent international connections is working with the Jeder Institute in Australia! We are also part of Citizen Network, who are leading on Self Directed Support initiatives in Europe, and beyond. We were very aware that ‘National’ could have limiting connotations for many esteemed colleagues who we were keen to partner with, and felt that we wanted to open up people’s perception of what the Network was about.

Changing the way we describe the National Brokerage Network is part of the reason for renaming it, because we don’t want to limit our reach, and we know that we have a lot to learn from the innovation happening within Self Directed Support in other countries.

If you are involved in any innovation or new developments relating to Self Directed Support, we’d love to hear from you!

We have been working on increasing our reach and growing the membership of the Network- partly to support the ongoing professional development of Independent Support Brokers but also to increase the opportunities to work with new people and organisations committed to the advancement of Self Directed Support and Personalisation.

Membership of the Network offers some of the following benefits:

✔ Use of SBN logo

Membership of the Support Brokerage Network (SBN) provides members with access to the membership area of our website where they can have access to a whole range of tools and resources to support people with Self Directing their own Support, Person-Centred Planning Approaches and Community Connecting. As an example of how some of the resources can be used; recently we have been working with James to start building a Person-Centred Plan. James is working towards moving into his own home with a team of staff supporting him. He has very clear ideas about what he wants his support to be like, and some brilliant goals for what he wants to do with his life.

To support James to express himself, we used the following tools (from the resources in the membership area of the website) with him to capture his views and ideas:

✓ Getting in the way!

✓ Good support for me

James used these tools to support conversations with his social worker where they began to develop his plan together. Using the tools enabled James to bring power to his words!

SBN membership is currently free until April 2022. Why not sign up as an individual or organisation to gain access to our brilliant resources?

We are now able to share referrals for new work with Brokers who are registered with the Support Brokerage Network on the directory. Please get in touch with us if you would like further information about this: info@imagineer.org.uk

We’re very excited to see the Network grow, and we hope the rebrand will open the way for some exciting new connections and conversations! 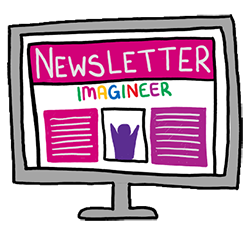